I know I have seen at least one instance of a post or stud earring in an 18th century portrait, or was it 19th century?  I cannot find it!  When doing research I have a wonderful booked called Earrings from Antiquity to the Present by Daniela Mascetti and Amanda Triossi.  It gives a great chronology of earrings and what was popular and what was not as well as when new technologies came into being.  The first instance that I see of anything like a stud mentioned is something popular in the 1930's described as a "prong soldered at the back of the earring, which is inserted into the pierced earlobe and secured by a small, usually hexagonal, plate.” 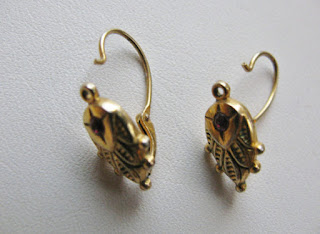 Earrings from my personal collection showing the leverback going into the BACK of the ear and connecting in the front.  These are solid gold with an Amethyst decoration.

My articles about runaways are a good place to start for jewelry explained on what they had on or what they may have taken with them.   I'd also suggest for campfollowers (or the lower sort/working class person) an article that I did for that as well.

As with anything, there is usually a caveat to everything in that depending on the prosperity of the shop or trade the working class person is associated with could mean they wear something nicer or nothing at all. 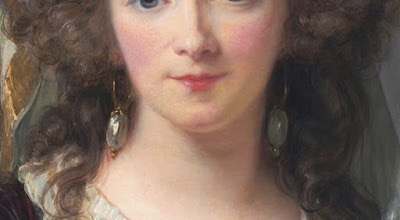 I also checked my other two "go-to" books called Jewelry in America, 1600-1900 by Martha Gandy Fales as well as Jewellery in the Age of Queen Victoria, A Mirror to the World by Charlotte Gere and Judy Rudoe and did not see any posts/studs whatsoever into the 19th century.  That doesn't meant they didn't exist, but maybe they weren't common or popular.  Many of the designs for earrings usually showed a shepard's hook (or what we call an earwire). 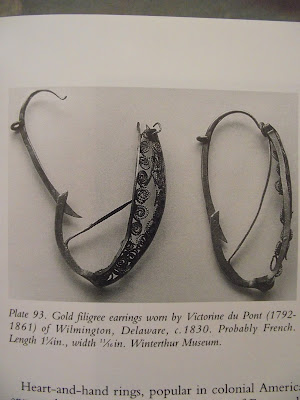 I offer a presentation which can be requested if interested!  Other styles of earrings included:

Two-Stone (also known as Double Cluster or Double Drop - have two large oval faceted gemstones or were made of metal, the larger on top with the plane joining the two embellished with various decorative motifs.)

Poissarde (hinged fitting at the back, usually in the form of a flat panel or half decorated loop decorated with enamel or with stones)

So, should you wear posts for your impressions?  You could but...  I do sell post style earrings but they normally have a dangle drop to them and emulate those of the time periods I'm trying to focus on or have an illusion of an earwire on the back.  But, just a regular pearl post or bead post is probably no correct until we can find proof.  I never say never.  There is so much out there that I haven't seen, it could be there and I have overlooked it.

What have you seen out there?  Please share your thoughts and send them to me at kimberlywalters@comcast.net
Posted by K. Walters at 10:39 AM