I will be cooking at Patrick Henry's Scotchtown on 2 October in their hearth kitchen with the 1st Virginia Regiment of the Continental Line. If you are in the area, stop on by to see us serve Mrs. Mary Cary Ambler (portrayed by Ms. Kerry McClure) in the house.  The year will be 1780.

We will be using my book, A Book of Cookery by a Lady. I have enlisted Gema Gonzalez once again to assist me with this endeavor!

Within my book, chapter 8 entitled, "How to Take Tea" will be used as our guide. Tea in the 18th century was a social time with it being oversaw by the lady of the house, and was her time to shine. There may have been several people there gossiping, playing cards or other games, or even dancing. Tea was not necessarily done at a specific time as in the 19th century. Tea also became a popular breakfast drink (they also drank beer or spirits) later in the century.  They may have had bread and butter, sometimes cakes, meats, cheeses, fish, etc. offered to eat. 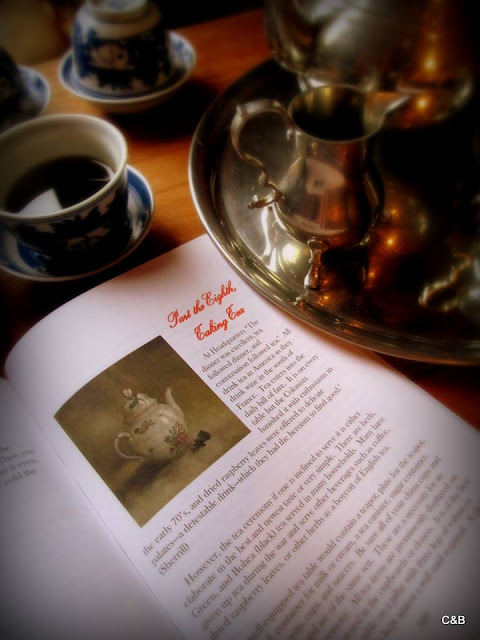 Photo by Paul A. McClintock of From Common Hands Studio

When doing my research, I am going to use a couple of passages from Jamison Borek's Patriot's & Poisons where she describes tea taken by her characters. Since tea after a certain period within the colonies was hard to come by due to the protests, the Boston Gazette in 1768 recommended using old-fashioned herbs as infusions to use instead of tea. It was recommended:

"Tea made from a plant or shrub grown in Pearsontown was served to a circle of ladies and gentlemen in Newbury Port who pronounced it nearly, if not quite, its equal in flavor to genuine Bohea. So important a discovery claims attention,
especially at this crisis. if we have the plant, nothing is wanted but the process of curing it into 'tea' of our own manufacture."
(Taken from A Social History of Tea by Jane Pettigrew & Bruce Richardson)


Using parsley, thyme, marjoram, rosemary, sage, sweet fern, spicebush, ambrosia, leaves of raspberry and strawberry, lemon balm, verbena, and wintergreen were among favorites.  The article in the Boston Gazette was referring to a plant grown in Portland, Maine, called Ceanothus Americanus or what we call "New Jersey Tea." 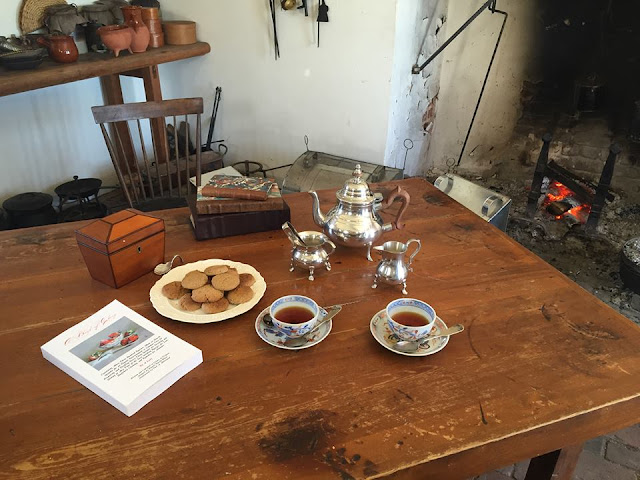 Tea and koekjes at Gunston Hall for a video for Donna Thorland's book, The Dutch Girl
Posted by K. Walters at 9:55 AM