I am pleased to announce that the Schuyler Mansion in Albany, New York, will soon have a selection of my jewelry geared towards the history interpreted there.  Schuyler Mansion was once home to Philip J. Schuyer, Revolutionary War general, US Senator, and also a business entrepreneur. He and his wife, Catharine Van Rensselaer, both descended from affluent Dutch families and together, raised eight children in their home.

This is a special day for me in that my ancestors leased land from the van Rensselaer's in the 18th century, and I descend from some of the first families of Albany!  I have van den Berg, Hogle, and van Valkenburg (among others) in my family line, and "Kathryn" is also a family name that exists for several generations.

Working directly with the Friends of Schuyler Mansion, we thought it a good idea to try to emulate a pair of earrings that Katy Schuyler wore.  This portrait was painted in 1795.  They are hard to ascertain the style from the portrait, but since it was done in the late 1790's, they could possibly be hoops of pearls from my studies of fashion plates and portraits of the time period. 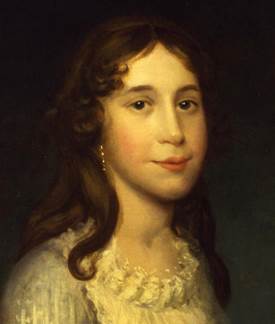 Katy Schuyler
(Courtesy of the Friends of Schuyler Mansion)

Katy (Catherine) was the youngest daughter and fifteenth child of Philip and Catherine Van Rensselaer Schuyler. George and Martha Washington were her sponsors when she was baptized in Albany - she was born in 1781. In May 1803, she married Samuel Bayard Malcolm, and they had four children before he died in 1814. In 1822, she married James Cochran, her first cousin. Details on her life are contained in 1897's "A Godchild of Washington," by Katharine Schuyler Baxter." (Check out Find A Grave for this and other information.)  Her older sister, Elizabeth, married Alexander Hamilton - yeah THE Hamilton.  While I am usually skeptical of books in the late 19th and early 20th centuries on biographies and genealogies, since Katy died in 1857, it wasn't that much later that this book was written.  So, I am interested in perusing this one! 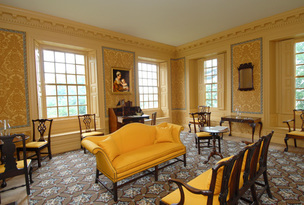 The site is a part of the New York State Parks, Recreation, and Historic Preservation.

If you are in the Albany area, do call and schedule time to visit the mansion.  I will be doing so myself!  In the meantime, I will be following their blog and Facebook pages!