A couple of years ago, I was able to purchase the mold for a reproduction 18th century Masonic shirt pin from William Hettinger, III.  He had hand made jewelry for the reenactor/living historians prior to me starting my business.  His work was exquisite, and I own several of his pieces as well.  He also is selling several things from his own personal collection of original items - not the Masonic pin unfortunately as I would buy it! - but other items.  So do check out my shop in the Antique section.

With that said, several men have come into my shop asking about my carrying a Masonic shirt pin.  I know that there are several silversmiths that do make them for those who want "trade silver" and the like for reenactors; however, I decided to make mine in several colors in the mold that was William's.  It is a cut steel type of look.  Mine will come in an antiqued and plain form in silver, gold, and gunmetal which is plated over copper.  This is perfect for any gentleman to wear today or for their living history needs. 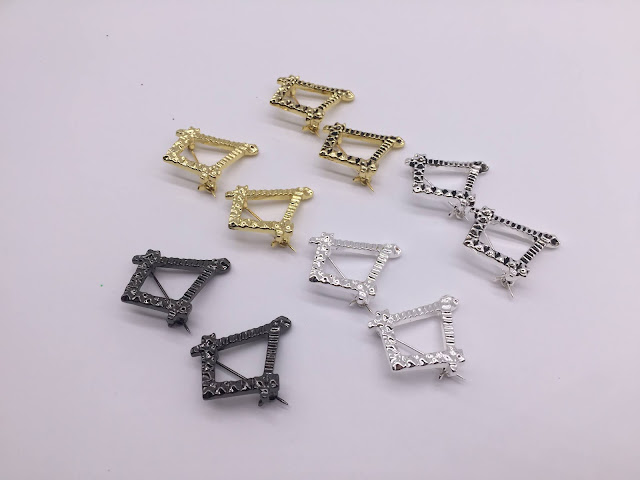 One of my best sources for jewelry when I am researching is "Jewelry in America 1600-1900" by Martha Gandy Fales.  Within her book, she discusses Masonic “jewelry.”  My newest piece offered in my shop is based upon the Master’s square and one that we see on George Washington in his portrait by Charles Willson Peale dated 1772 and commissioned by Martha Washington (https://www.mountvernon.org/george-washington/artwork/life-portraits-of-george-washington/#-) and I also found a copy by Rembrandt Peale painted in the 19th century sold at Christies.  The item itself is closing his shirt, which we can surmise that it was a buckle or shirt pin.  In the time period, they called them "buckles."

Within the book, Ms. Fales states the following –

“After the Revolution, fraternal societies such as Freemasonry which had been introduced into the colonies about 1730, began to flourish.  Due to the ritualistic nature of Freemasonry, a whole body of symbols was selected and was basic to the organization and teachings of the order.  These symbols appeared on their membership certificates, their regalia, the walls of their meeting places and on their medals or jewels.  At the same time, these emblems helped popularize concepts of the Enlightenment and played a part in the dissemination of the ideals that led to the Revolution and the establishment of a new form of government based on  natural rights and equality.

Because Freemasonry developed out of craft guilds, many of its symbols represented the tools of the stonemasons, such as the trowel used for spreading the cement to unite a building; the square representing virtue; the level, equality; and the plumb, uprightness.  The chisel, which represented the benefits of discipline and education, could be explained with a gemmological simile:  ‘The mind, like the diamond in its original state, is rude and unpolished; but as the effect of the chisel on the external coat soon presents to view the latent beauties of the diamond; so education discoveres the latend virtues of the mind and draws them forth.’

Architectural principles were used to explain truth, beauty, nature and reason through lasting examples of stonemasonry, such as the images of pyramids, temples and cathedrals, and reflected the current interest in classical architecture.  The ionic, doric, and Corinthian orders symbolized for the Masons the attributes of wisdom, strength, and beauty.  The entrance to King Solomon’s template was suggested by a pair of pillars supporting globes, and the floor of the temple was represented by black and white tiles symbolizing good and evil.  Mathematical and scientific principles contributed to Masonic devices such as the letter G for geometry.  To all of these were added religious, heraldic, and philosophical symbols, providing a rich panoply for the jewels that were part of the Freemason’s regalia.

In 1762 silver brooches set with stones especially for Freemasons had been imported from London and offered for sale in Annapolis, Maryland.  However, the jewels were more often made locally.  The sale of a freemason’s medal was the subject of the first entry in Paul Revere’s extant account books.  At first, only the Masters and Wardens of each Masonic Lodge were adorned with jewels suspended from white ribbons, but gradually each officer acquired a different jewel.

By the end of the 18th century, Paul Revere, himself a Mason, was making complete sets of jewels such as those made for the Washington Lodge in Roxbury, Massachusetts, charted in 1796.  The Master’s jewelry was in the form of a square.  A level was the emblem worn by the senior Warden and a plumb by the Junior Warden.  The Treasurer was represented by crossed keys, the Secretary by crossed pens, the Chaplin by a Bible, the Stewards by cornucopias, and the Tyler by crossed swords.  After the Revolution, the American Lodges began to develop their own vocabulary and devices.  Revere added to the Masters’ and Wardens’ emblems a sunburst of sixteen rays pointing to the sixteen oval links in the surrounding chain, symbolizing the new nation of sixteen states.  Tennessee having been admitted as the sixteenth state in the same year that the Washington Lodge was chartered.

Former Masters of Masonic Lodges were given the Past Master’s jewel designed with a quadrant conjoined with an open compass.  These were often embellished with elaborated settings made of pastes or precious gems.  An example with a green paste at the top of the silver compass had an additional medal suspended between compass legs.  The medal part, probably imported from France, was cast ormolu with a bowknot at the top and set with green, blue, white, and yellow pastes.  The American made quadrant supporting the medal was veneered on to with gold and marked on the back with the maker’s name, Jenkins.

During the Federal period, Masons occasionally had personal jewelry made, often to commemorate their initiative, and designed to suit their owner’s preference.  In the mid-eighteenth century, faction developed within the Freemasons with degrees of the Mark Lodge and Royal Arch Masonry.  This gave rise to Mark jewelry consisting of an individualistic design.  The Mark jewels were usually round or shield shaped and were engraved with the initials HTWSSTKS, referring to the Hiramic legend which was part of the ritual.  Samuel Cabot, a Boston merchant, became a Master Mason while he was in Paris.  His gold Mark jewel presumably made in Paris was engraved on one side with his name and the designation of the French Lodge.  On the reverse was his personal rebus, the arms of Cabot, three chabots (sculpins) with a scallop shell crst.  Lockwood N. DeForest, a member of Jerusalem Chapter No. 13 in Bridgeport, Connecticut, had a silver Mark jewel engraved with his emblem, a three-masted schooner under sail flying a pennant and an American flag"

I believe that the "jewels" or pendants described in the above article were to wear for the meetings and ceremonies of the Mason.  The shirt pins in the paintings are being worn in civilian or military dress as a sign of their being a Mason.  However, I am not well versed in this.  My father was a Mason but he seemed to have skipped the meetings or kept his oath of secrecy, and I was a Rainbow girl but was not in it for very long.  We had meetings and rehearsals.  My mother was in the Eastern Star as well and equated it to more of a social club than anything else.

More on Freemasonry in America can be found in a great article, Freemasonry in 18th Century America by Jim Peterson https://earlyamericanhistory.net/freemasonry.htm

In 1772, the Reverend Boucher asked Charles Willson Peale to accompany Jack Custis home to Mount Vernon from Annapolis, Maryland.  Peale had met Mrs. Washingotn in 1771 in Williamsburg, Virginia when he painted miniatures of her two children.  Meeting her again at Mount Vernon, the artist arranged with her to paint her husband's portrait as a companion piece to her earlier portrait by John Wollaston.  Mrs. Washington prevailed upon the Colonel to pose for Peale, and thus began Peale’s long friendship with Washington and the first of the seven sittings that became the basis of his many portraits.  The portrait, now in the Washington and Lee University, shows him in the uniform of a colonel in the militia, with the orders of the day showing from his pocket.  No mention within Peale’s papers of the pin closing his shirt.  I do believe it is a Masonic pin.  Taken from The Selected Papers of Charles Willson Peale, Volume I, by Lillian B. Miller. 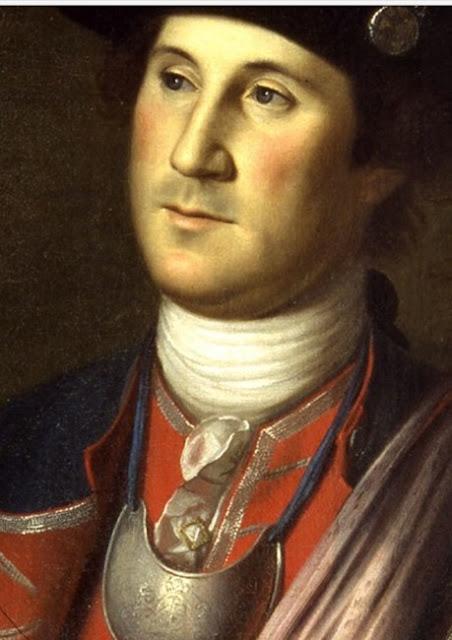 When searching for examples of 18th century “jewels,” medallions, or brooches, I came across this one (https://petercameronantiquesilver.com/product/an-unmarked-george-iii-silver-masonic-jewel/) from Peter Cameron’s archives that is unmarked dated circa 1770, of the George III provenance. They were probably worn on ribbon around the neck during a ceremony as this one is missing a ring or bail, and you do not see any type of brooch attachment on the back.

I have also come across another portrait with a similar pin as Washington above, in the An Experiment on a Bird in the Air Pump dated 1768 by Joseph Wright of Derby.

Detail of An Experiment on a Bird in the Air Pump
These are now in my Etsy shop available for sale!  I will also sell them wholesale for any business that is interested.
Posted by K. Walters at 5:39 PM