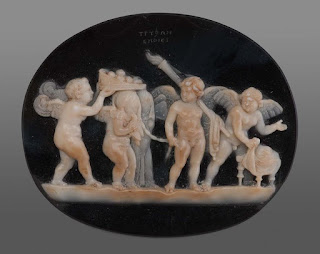 I was asked today about Cameos in the 18th Century. I thought I'd put out a bit of information that I have compiled for those of you who want to wear your cameos...while I have personally not seen cameos worn as a pendant on a ribbon or on the front of a gown in portraiture at this time, I would not discount wearing them.  They were worn but how common were they to all?  The true heyday was in the mid to late 19th Century (then Limoges enameled jewelry became popular).

"In the salons of 18th-century Europe, carved gemstones were all the rage with high-society ladies. Cameo makers of the time would take Plaster of Paris molds of these carved gemstones as records of notable cameo collections. At the time, cameos were a sign of wealth and privilege, but glass paste brought cameos to the mainstream. In fine jewelry, the cameo is defined as an ornament carved in relief from a high-quality material such as stone, shell, coral, Gutta-percha, bog oak, ivory, lava, or mother-of-pearl. The most common cameo motif is the portrait. These bore the likeness of an actual person, usually a well-known person of the day which included a ruler, scholar, or philosopher. In the early 19th century, cameos started to feature an anonymous Roman woman wearing no jewelry.

Cameos gained steadily in popularity over the 18th century, as evidenced by their occurrence as motifs on objects of all sorts. The Staffordshire firm of Josiah Wedgwood sold innumerable copies and imitations. One of his more successful items was of the "Marlborough Cameo," a sardonyx cameo from the first century B.C. depicting the marriage of Cupid and Psyche that was owned by Peter Paul Rubens before it entered the collection of Thomas Howard, Earl of Arundel, sometime before 1727.

As early as 1779, portraits were made in glass and ceramics particularly of Benjamin Franklin in France. These were seen generally in snuff box lids and rings. Wedgwood medallions were also manufactured as they were moulded or stamped out quickly eliminating time-consuming carving by hand. Artistic skill was needed only for making the initial master pattern.

The cameo really came into the height of fashion when Napoleon had an interest in Roman cameos after his campaign in Italy in 1796. The carving of shell cameos was then revived as well. This included in America as well as the rise of the professional sculptor who also augmented their major works with miniatures carved out of shell or stone.

Photo is of the cameo with the wedding of Cupid and Psyche, or an initiation rite. Mid 1st–late 1st century B.C. Signed by Tryphon.

Copyright K. Walters at the Sign of the Gray Horse.  None of this can be copied or used without the permission of Kimberly K. Walters.