A Book of Cookery, by a Lady

Earlier this year, I was delighted to discover A Book of Cookery, by a Lady, a guide to 18th century cookery compiled by Kimberly Walters.

The book offers a wonderful insight into life in the 18th century kitchen and is invaluable not only as a research tool, but even as a cookery manual for those who fancy a taste of the Georgian world in the 21st century. I cannot recommend it highly enough, and I think that any 18th century or cookery fan would be delighted to find it in their Christmas stocking!

I'm really delighted to welcome Kimberly to the salon today to discuss what inspired her to compile the book and choose a favourite recipe of her own.
(http://www.madamegilflurt.com/2015/11/a-book-of-cookery-by-lady.html) 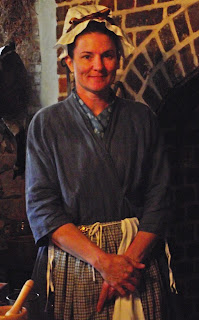 I love living history. While, I don’t live it every day, I do dress up and pretend to be a lady, an indentured, or sometimes a convict servant of the 18th century to support historic sites and events. Those who take part in this hobby have various reasons why they put on “funny” clothes and reenact what our ancestors did on a daily basis. I am a bit of a stickler for historical accuracy. The research aspect of living history of any period is very important in order to get your impression right. Living history is a lot like family history and I think of it as honoring my ancestors whether they were rich or poor, regardless of the social and political norms that they lived under during their lifetimes. Getting my impression right brings history to life so that visitors walk away with a sense that they’ve stepped back in time to catch a glimpse of what it was like to live back then. When I first started participating in 18th century living history I became interested in many things, but hearth cooking became one of my main focuses. I have become passionate about the art of what has been called “historic foodways.” After taking some period cooking classes to correctly learn how to use the equipment and utensils, I then started researching recipes trying to find day-to-day information on how they cooked their food. I know that I had to delve into the period cookbooks. I often got lost in the minutia, trying  to remember it all, and knowing that I could not possibly do so. resulted in A Book of Cookery, by a Lady. 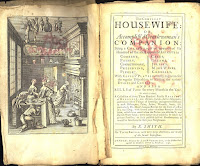 During the research process, I found that there were many historic cookery books containing the same information (they had no plagiarism laws before the 20th Century), or some very unique information describing how to set a table or even how to carve meat. Trying to remember where a specific bit of information was located became harder and harder as I was researching. It became apparent that it really needed to be gathered into one compendium for my own personal use. A friend suggested that I share what I had gathered by publishing it. This seemed a great idea as any profits could go to help off-set some of the costs of my rescued horses. 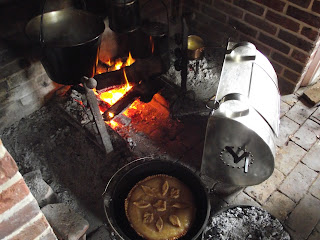 Hopefully the reader will find lots of useful chapters in my book that are not only interesting from a historical viewpoint, but are also very practical for use in today’s cooking. Some of the information includes food items in season, period cooking terminology, measurements, recipes (known as receipts in the 18th century time period), how to carve meats, needed equipment and utensil terms, how to take tea, and even how to choose produce at the market. During my research I became enamored with an article by Ms. Nancy K. Loane about Elizabeth Thompson, General George Washington’s housekeeper during the Revolutionary war years. Loane published an article about Thompson for the Past Masters in Early American Domestic Arts newsletter. According to the article and my further research, Mrs. Thompson’s contribution to the Washington’s household was tremendous; I therefore decided to dedicate my book to Thompson and to my parents. 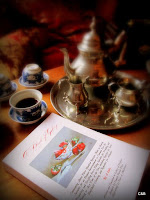 With the holiday season fast approaching, readers will even find a chapter on period Christmas dishes. When looking for information about the holidays, I wanted to keep it simple and focus on how Christmas was observed during the 18th century. I found a wonderful description from The History of Newburyport Massachusetts, Volume 2, published by the New Hampshire Publishing Company in 1978, as well as information from the George Washington Papers in the Library of Congress about the General paying for a bank of music. Here is an excerpt from my book from that chapter:


“It is also the custom for the family to go to church and the men may go out and fire their guns all around the house and grounds. Compliments of the season are a courtesy, such as wishing others a “Merry Christmas & all the Compliments of the Season,” or Best Wishes for a Merry Christmas” by the heads of house to all and each other, and he is expected to carve the meat, drink to the health of others, and make conversation at table. All in all, 25 December is just considered another day but it was special. Additionally, the religious customs varied from Colony to Colony and the holiday was celebrated differently based upon those beliefs. On Christmas Day of the year 1779, General Washington paid £15 for a band of music. He also wrote to Robert Morris on 25 December 1776 from Head Quarters in Bucks County, Pennsylvania, “I hope the next Christmas will prove happier than the present to you and to Dear Sir Your sincere Friend and humble Servt.” 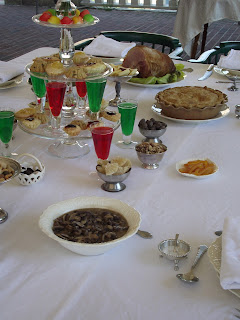 “Christmas Dinner with the Washington’s would typically be simple, but His Excellency was still known to put on an elegant table even during the war years. They were known to have set the table during this time of year with the same intent as if they were home One description says, “in the middle of the table was placed a piece of table furniture of wood gilded, or polished metal, raised only about an inch, with a silver rim round it like that round a tea board; in the centre was a pedestal of plaster of Paris with images upon it, and on each end figures, male and female, of the same. It was very elegant and used for ornament only. The dishes were placed all around, and there was an elegant variety of roast beef, veal, turkeys, ducks, fowls, hams &c.; puddings, jellies, oranges, apples, nuts, almonds, figs, raisins, and a variety of wines and punch. We took our leave at six, more than an hour after the candles were introduced. No lady but Mrs. Washington dined at table. We were waited on by four or five men servants dressed in livery.”
 

Regardless of what you serve during the holidays, a good ginger bread is always a delicious addition. An article about food should also include a receipt – here is a receipt for Ginger Bread taken from Murray’s Modern Cookery Book, Modern Domestic Cookery based on the well-known work of Mrs. Rundell... by John Murray, While this recipe is taken from the mid-19th century, I found it to be a mini-history:


“THIS is amongst the most ancient species of cake known throughout England and the north of Europe. In this country it is rarely eaten, except by children, but in Holland it is the common accompaniment of the "schnaps;" and in Ghent there are shops as famous for it as our "Leman" for biscuits. The following are selected from amongst the numerous ways of making it - Take 1 lb. of treacle, 1 lb. of butter, 2 lbs. of flour, 1 oz. of ground ginger, sliced candied orange, and a glass of brandy. If not intended to be rich, omit 1/2 the butter, the brandy, and lemon, and make it of rye flour, household flour, or oatmeal. At Leeds it is made with equal quantities of oatmeal and treacle, mixed with an eighth part of melted butter and brown sugar, and 1 oz. of powdered ginger, with 1/2 that quantity of other spice, to 4 lbs. of meal. This is called in that neighbourhood "Parkin," and is made in almost every cottage on the 5th of November, and pieces sent about as presents. The treacle should be perfectly sweet, for, if in the least degree sour or too thick, the bread will be indifferent in flavour and appearance. Ginger, too, should be fresh ground, as it loses much of its strength by keeping. When baked, the tin must be well buttered to make the cake come out; and when done, a fork, if thrust into it, will come out clean.” 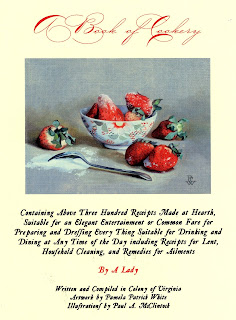 During this holiday season, think about purchasing A Book of Cookery by A Lady to learn more about historical cooking and support my rescued horses. For more information about my book and jewelry please visit:www.kwaltersatthesignofthegrayhorse.com.
  
Written content of this post copyright © Kimberly K. Walters, 2015.