This year I spent my 4th of July (244th anniversary and my 6th year) at the Paca House and Gardens in Historic Annapolis.  I portrayed Mrs. Eleanor Hall, the wife of John Hall, Esq.  She and her husband would have known the Pacas and possibly spent some social time with them.  In the case of Mr. William Paca, he was in Phildelphia in the time period having just been given the go-ahead along with Mr. Samuel Chase, Mr. Thomas Stone, and Mr. Charles Carroll (of Carrollton) to sign the document.  By '76, Mrs. Paca was gone 3 years and William was a widower and single parent.  Yes, Annapolis had FOUR signers of our Declaration of Independence from the King of England, George III. 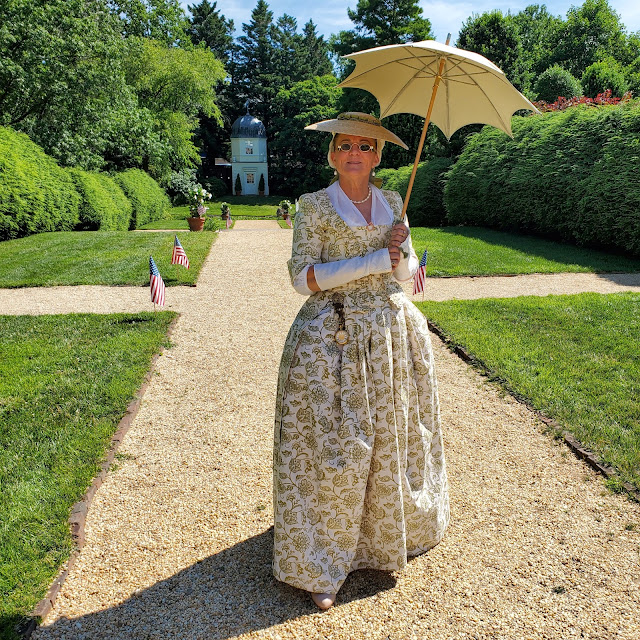 Standing in the main walkway in the gardens with the summer house behind me.

Since my husband was out on business, Captain James Brice (who lives right next door) was accompanying me on a stroll in the garden.

Captain Brice (Harry Aycock) and I - we are essentially the brains behind the group in organizing and researching the historical aspect of all characters.

As usual, it was a hot day so I had my umbrella (made by Barrington Brolly) with me as well as a hand fan.  We had very engaged visitors who came and walked about asking questions, and were appreciative of what we were doing.  We did have a little inquisitive young man ask how many times the Paca House burned down.  LOL  We said, 'None."  He said, "That was a lot!" and we said, "That means ZERO."  His Mom quickly took him away. 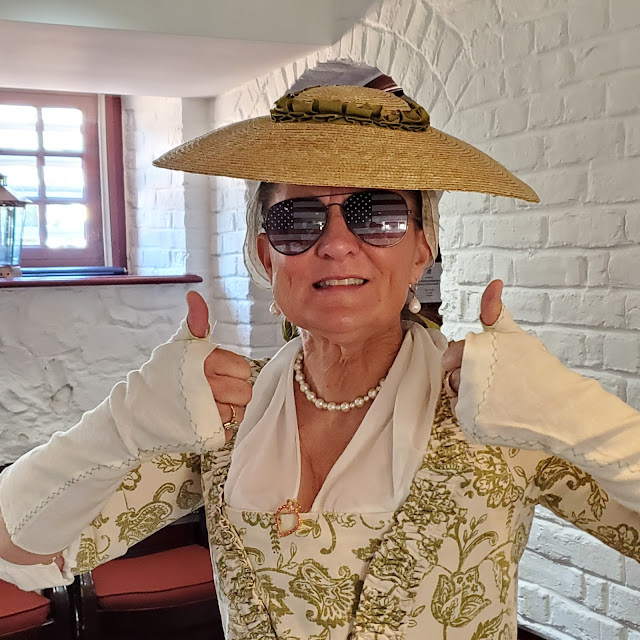 The 4th of July is an event that many spend with their families to celebrate the Independence of our nation.  It is always a wonderful thing when people can get out and see the places that people lived and worked who fought for us to be free.  These people put everything on the line for us - their lives, jobs, and fortunes - not all of them were rich or inherited lands.  Once they declared Independence, there was a bounty on their heads.  If we had lost the war, all of our Founding Fathers would have been hung.  If that had happened, we would be a totally different nation today, and many of us may not even be alive now.  Our Founders set up a nation that propelled us to greatness as we were set up on Biblical principles, and to getting us out of some of the laws that we inherited so that we could eventually abolish them.  This could never have been done overnight.  This nation had different ideas on how it should be managed, the laws we should have, and each State eventually also had their own Bill of Rights and Constitutions.  Just as each of us with friends and family may not agree on everything - think of it on a national scale (understanding that they did not have as many here as we do now).

We always have fun during the event.  Many like to know what I am wearing, so here goes ~ 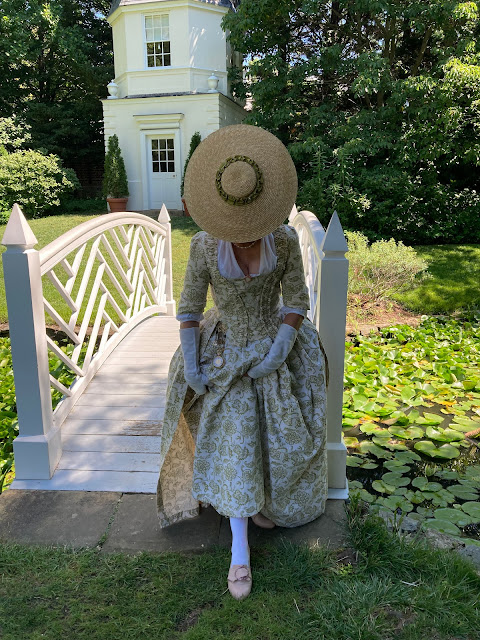 My gown was made by Verdanta on Etsy with IKEA fabric that I sent to her.  Hat, embroidered mitts, and kerchief made by The Silly Sisters.  Stockings are white with a pink clock on the side by Anacronicos, and shoes are Allures d'Atan.  Buckles and all jewelry are from my shop!

We always try to have some fun as well!  Looking forward to my next event which will be the Mount Vernon Market Fair in September!  In the meantime, I will be making new jewelry, hopefully writing more, retiring from the Department of Defense after 34+ years, and visiting historic sites to learn more about our history. 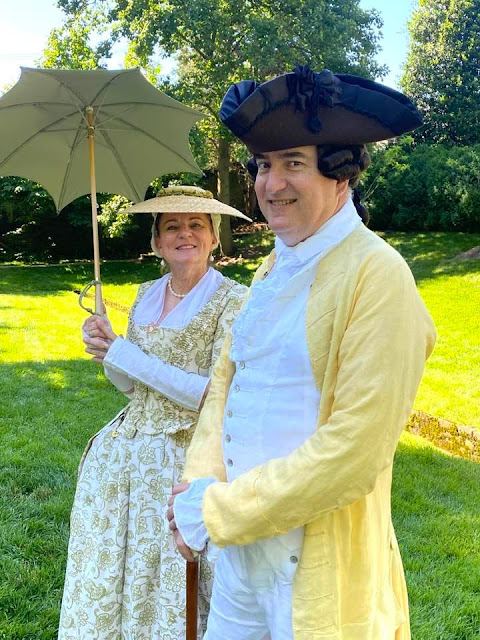 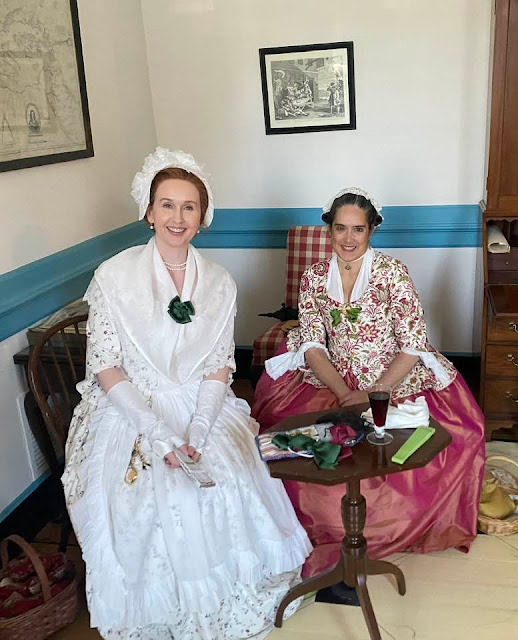 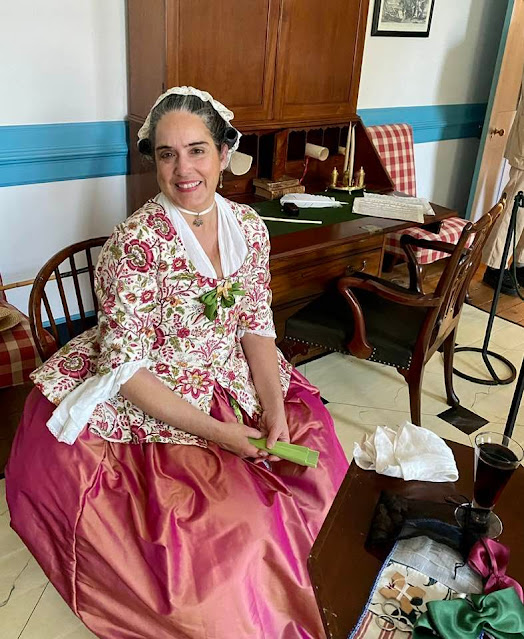 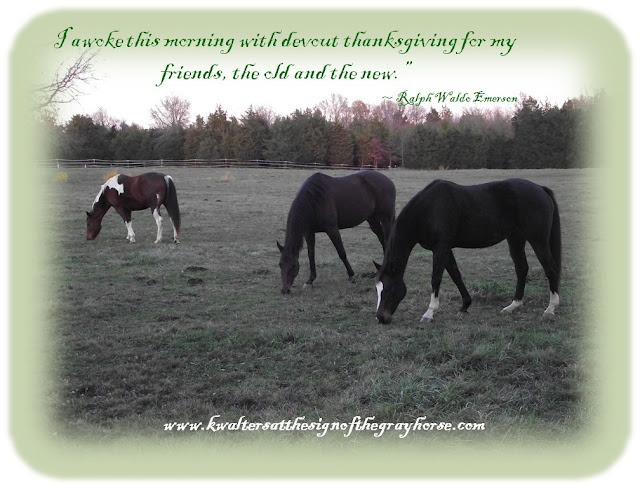