What Type of Jewelry do I Wear as a Campfollower?

Many come into my shop not knowing what type of jewelry they should wear for certain living history impressions.   There is a persistent myth in the hobby that campfollowers couldn’t afford or did not have jewelry.

The answer is a lot more complicated than that.  I’d like to BUST that myth.  Campfollowers may have had jewelry, and it depended on their station in life as well as at what point in the war they were in.  There was a huge difference in what was taking place between 1776 and 1781 in what was available for purchase, to where people were located, and what was going on during the conflict.  While my personal living history focus is 18th Century, this can also apply to other centuries and other impressions - including the Civil War and even World War II.

Jewelry (and clothing for that matter) equated to wealth, but many also inherited items.  There are so many variables in who you were, where you were, and what station in life you were born into as to what you would have owned.  It would be understandable that by 1781, any jewelry a campfollower owned was traded, sold, stolen, lost, or hidden.

Jewelers, such as James Craig, established himself in Williamsburg at the Sign of the Golden Ball by 1746 (Alexander Kerr before him – 1737).  Craig and his fellow jeweler/goldsmiths, Patrick Beech and James Geddy, combined silversmithing and jewelry making with more importing and repairing items to offer affordable items.  Not all jewelry was made in the colonies, and it is very probable that it was not made by the person wearing it.  Jewelry was made not just for the rich, but for any size wallet.

There were other merchants, including milliner Catherine Rathall, that had a shop in Williamsburg from 1767 to 1775 having come from Fredericksburg, Virginia.  She sold jewelry along with a multitude of items.   Lots of shops that were similar to general stores also sold jewelry.  So, it wasn’t just gold or silversmith shops that jewelry was purchased in.

When researching run-away ads, I found servants that were wearing or had jewelry when they left that do not seem to hint that they had taken it before they left ~

“ESSEX county, July 31, 1770. RUN away from the subscriber, in the night of the 26th instant, two Irish servants, TERRANCE GAFFNEY and JANE his wife, aged about 30 years each…JANE has a thin visage, and wears gold bobs with stones in them, and black callimanco shoes, with plated buckles...” “Virginia Gazette, (Rind), Williamsburg , September 27, 1770.

“HANOVER TOWN, May 6, 1774. RUN away from the Subscriber, in March last, a likely Virginia born Wench named BETTY, about 22 Years of Age, stout and well set, wears Silver Earrings set with white Stone, and carried with her several Suits of Clothes…” Virginia Gazette, (Purdie & Dixon), Williamsburg , May 12, 1774. Postscript.

RUN away from the subscriber, in Botetourt county, on the 13th instant, a convict servant man named JOHN MURPHEY, about 5 feet 3 inches high…  He was dressed when he went away in a white Russia-drill coat and waistcoat, and leather breeches, but probably will change his clothes (as he took with him a variety of others) and attempt to pass as a freeman…also a silver watch, with a double case, on the inner of which is engraved Stephen May, London, and on the edge of the plate under the case the same...a small pair of almost square silver buckles…”“Virginia Gazette, (Purdie), Williamsburg,
November 17, 1775. Supplement.”

The John Ash Dictionary of 1775, Volume II, states the following:

“Bob – something suspended so as to play backward and forward, a pendant, an earring, a blow, a gentle stroke.  Also known as a cut wig.”

“Earring – an ornament for the ear.”

So, what do you wear?  My suggestion in general terms are as follows ~

Ears – Go simple when at all possible.  You may already have something in your jewelry box such as gold or silver hoops or possibly pearls or another type of bead.  Or you can wear no earrings.  I would not recommend wearing posts, but do wear earwires (i.e. fishhook) or leverback as they were more generally worn as seen in extant examples.

Neck – A silk ribbon is best, possibly with a small trinket or pendant.  You can also wear a simple beaded necklace, or wear nothing.

Fingers – Simple gold or silver band if you are married or nothing.  Not everyone wore wedding bands or rings so keep that in mind.  Many ladies have never taken off their modern wedding/engagement rings and that is fine but think about taking them off and having a plain band for your impressions to be more accurate.

Waist – If wearing equipage (later known as a chatelaine), I always suggest it to be a simple chain without a lot of things hanging from it.  The top should also be as simple as possible.  You can also wear your watch from it and whatever else you want.  I have not seen a hard and fast rule of what is on equipage.

Shift/Shirt - many shifts for ladies or shirts for civilian men had two button holes in which to close the fabric.  Sleeve buttons (or what we call cuff links) were worn to close them.  Even the lowest servant may have had sleeve buttons.

Cap – Plain or pearl topped 2 inch pin to keep it secured to your head.  Best to thread it through the cap and your hair.

Hat – Single ribbon or nothing.  Use of plain hat pins or a hat pin with one single bead on the end would be very appropriate.

I will be writing more about what type of jewelry to wear for certain impressions as well as what to wear with specific outfits over time, including at balls and dances!  If you have specific questions or want to see certain topics, just e-mail me.

I have many of the very items you need for sale on my Etsy page! 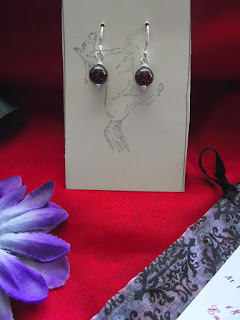 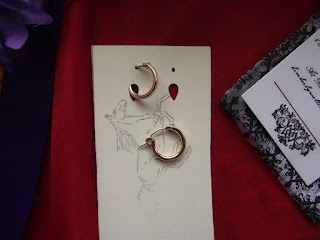 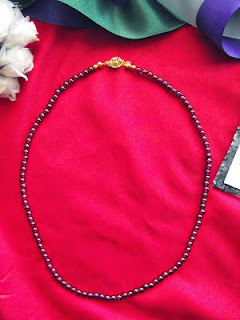 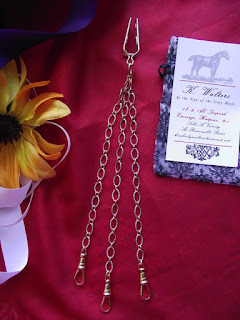